Teal Sherer is an American actress with a physical disability who is an advocate for the inclusion of performers with disabilities in the entertainment industry. She is best known for her portrayal of Venom in the web series The Guild and as herself in her own series "My Gimpy Life". She was also a member of Full Radius Dance. 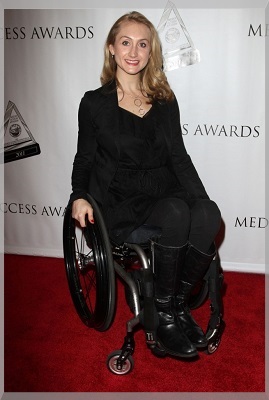 While in college, Teal performed in plays such as The House of Bernarda Alba and Antigone. In addition to performance, she participated more and more fully in the aspects of live theatre, such as stage management, ushering, and ticket sales. In addition, she performed with the Full Radius Dance Company, a physically integrated dance troupe.[2] Her first role in a feature film was in 2004, in Kenneth Branagh's film Warm Springs alongside Cynthia Nixon, Kathy Bates, Branagh himself, and Felicia Day.

In 2011 Teal created a pilot called "My Gimpy Life", envisioned as a comedy, written by Gabe Uhr, and directed by Sean Becker. It premiered at ITVfest on August 6, 2011.[citation needed]. The second season of "My Gimpy Life" began its Kickstarter campaign on May 15, 2013.